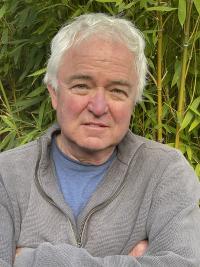 "Thiebaud’s influence on my work, and on my life has been strong. And I think it has been that way for a lot of his students." 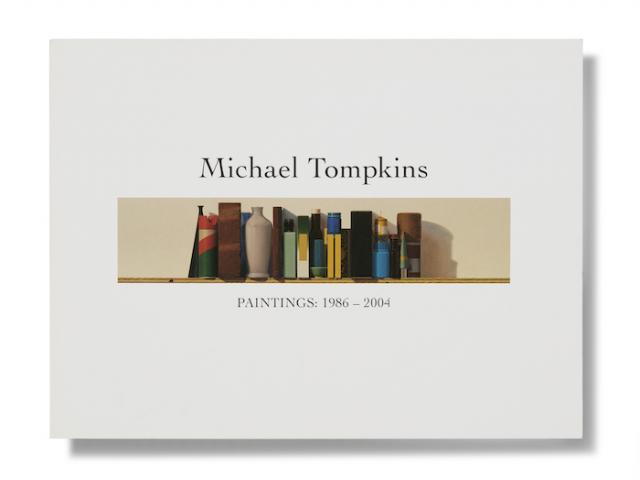 Michael Tompkins Paintings: Shadows Unto Silence and the Poetry of Things 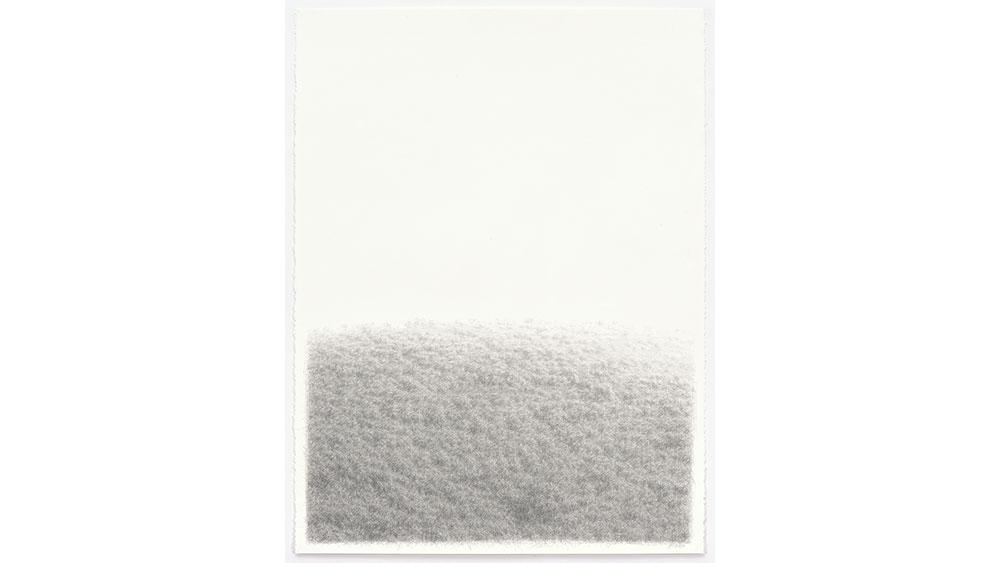 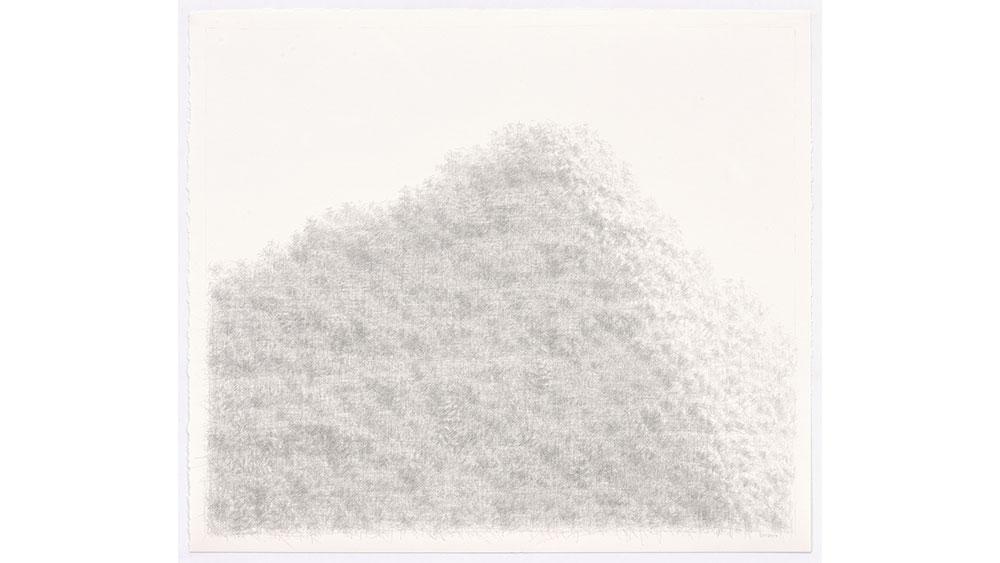 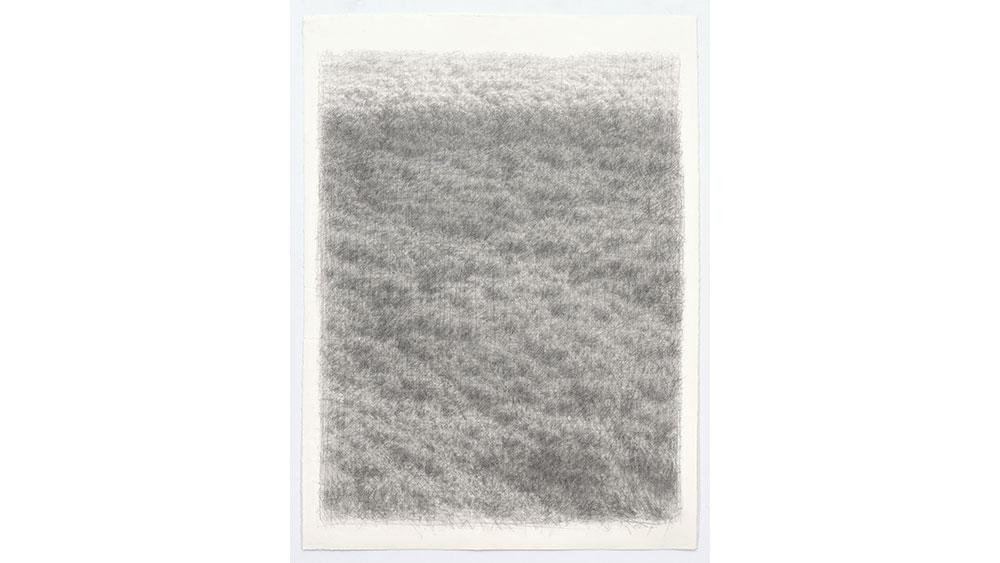 Michael Tompkins compares his artistic practice to a writer who works in multiple genres and switches between forms. His work includes meticulously composed, vibrantly colored still life paintings and intricately detailed landscape drawings. He initially began the drawings as a break from the intensive labor and time commitment of his paintings. For his more complex paintings, such as And a Bowler in the Trees, setting up the objects in his studio can take up to a week.

Despite only showing them publicly for the past five or six years, Tompkins has always created drawings, as well as 10-minute paintings, both in large-scale finished works and a dedicated sketchbook practice — he currently has 15 active sketchbooks. 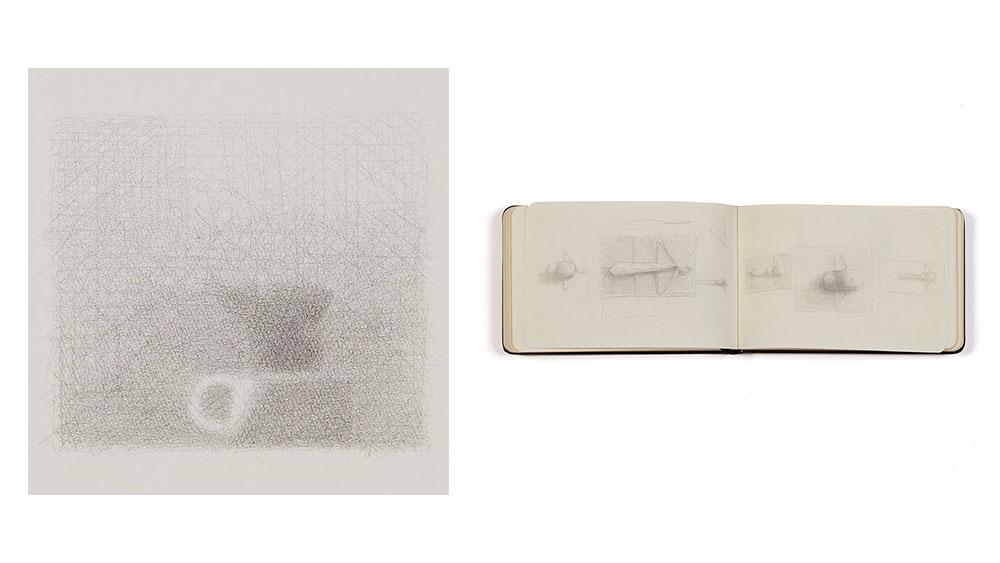 Early in his education, he absorbed Wayne Thiebaud’s lessons about the pleasure of simple things being shaped by light and shadow. Using the elements of geography to capture the way that light can shape a landscape, Tompkins creates imagined views that seem familiar, but do not depict a specific locale. The images become a utopia in the literal sense of the word: a no-place that is described in intricate detail. They also function as studies of time: the slow movement of the sun across a field over the course of a day. The absence of human figures and objects amplifies both a sense of timelessness and the passage of time.

In Pyramid, a triangular hill stretches towards the right corner of the paper, culminating in a sharp peak. This vista is created by layering, erasing and re-layering marks of different weight and shape so that the front side of the peak appears to be in shadow, while the right side appears bathed in brilliant light. The movement of the sun is indicated by these varied pencil marks, imitating the passage of time throughout the day. The shape of the hill evokes the craggy peak upon which the figure stands in Casper David Friedrich’s (1774-1840) famous Romantic painting, The Wanderer Above the Sea of Fog (circa 1817). While the rocky landscape of Friedrich’s wanderer was a metaphor for the rockiness of life, Tompkins’ hill has no such grand metaphors. The drama is in the making of the peak, the sheer virtuosity of its composition. Yet its commanding presence asks viewers to pause and consider the world around them and to revel in the beauty of nature, in much the same way as Friedrich’s wanderer gazed out to the sea.

In Late Light, Tompkins fills less than half of the picture plane with a grassy landscape that slowly trickles out in the distance. The expansive space left for the sky is reminiscent of one of his influences, 17th century Dutch painter Jacob van Ruisdael. In his View of Haarlem with Bleaching Fields (circa 1665), van Ruisdael captures the flat low-lying landscape, where the sky seems to reach down to touch the fields. Late Light provides a similar effect, where the back far edge of the field eventually disappears into the sky.

In Above Dividing Creek, however, we see the opposite: a landscape densely populated with hatched lines and other pencil marks. Only the very top has been lit by the sun. Up close, it appears to be a vast field; from farther away, undulations in the landscape appear, carving a path towards the top.

While none of these works function metaphorically in the same way that Friedrich’s or van Ruisdael’s paintings do — using landscape as a substitute for the power of man over nature, and nature over man — they do remind us of the sheer magnitude of the natural world, and of the joy we can find in its details. They illustrate what Tompkins has identified as his artistic inspiration and what he loves most about both Thiebaud and another major influence, Edward Hopper; what he describes as “a beautiful sense of structure that is jazzed emotionally by light.” In reference to Thiebaud’s teaching and painting, Tompkins once said that, "painting ascends from the simplest beginnings to the sublime.” One could say the very same about these exquisite drawings.